This post was written in response to a question from TheScientificParent.org reader, Andrea.

It’s tough being a parent these days. Sometimes I think it was easier for our parents and grandparents before the internet when they didn’t have so many mixed messages thrown at them. Today we are bombarded with all sorts of messages about food and nutrition. Every day we’re told what to eat or not eat. What food or ingredient might be “toxic”, or which are the “superfoods”. Attractive food bloggers, svelte trainers, celebrity chefs, and even TV doctors all have something to say about what you and your family should be eating and if we don’t follow their advice we’re told that we’re poisoning our children.

On most shopping lists you’ll find written “milk”. In the 80s and 90s, your decision about milk usually came down to 2% or skim, but now the sheer number of options makes it even make more confusing and overwhelming, so does the sometimes misleading marketing. Milk cartons read, “organic,” “antibiotic-free,” and “hormone-free.” What does all of this mean and does it make a difference when it comes to nutrition?

Before I go on, I want to disclose that I work for a supermarket chain that processes and sells both organic and conventional milk, so I know this issue rather well.

What does “organic” mean?   The use of the word “organic” and the USDA organic symbol is regulated by the US Department of Agriculture (USDA) and means that products must conform to certain standards set by the National Organic Program (NOP). In dairy farming these standards have to do with the type of feed (it must be organic), access to outdoors and grazing, and treatment of the animal not necessarily with the quality of the milk itself. 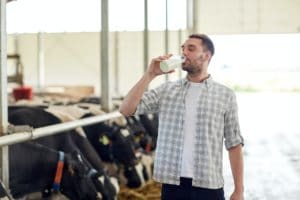 The NOP standards also don’t mention nutritional standards. The way organic milk has been marketed has lead consumers have been led to believe that organic milk is nutritionally superior to conventional milk. The jury is still out on this topic. One meta-analysis found that organic milk is higher in protein and omega 3 fatty acids, but if you were to compare their nutrition facts panels you would find that generally in terms of calories, fat, protein and calcium there is little or no difference between conventional and organic cow’s milk.  A recent meta-analysis looked at over 200 published studies and found that the nutritional quality of a cow’s milk was not as much due to the fact that the cows were on a conventional or organic dairy farm but a multitude of factors including the breed, age and the health of the cow and what they are being fed or were grazing on.

What about taste and nutrition? If you read the NOP standards for dairy farmers it mentions nothing about taste, because how things taste can depend on the individual. Some consumers find that organic milk tastes better, but perhaps it’s the marketing that’s lead them to believe there’s a taste difference.

On a conventional farm, antibiotics are only administered when cows are sick, usually with an infection that human mothers are familiar with: mastitis. The antibiotics are prescribed and administered after the cow is examined by a veterinarian. Antibiotics can be expensive, which makes their routine use simply not financially feasible for dairy farmers.

Beyond this, there are regulations regarding the use of antibiotics known as the “withdrawal time” which is the time after a cow is given an antibiotic that their milk can be used commercially. Additionally, all milk is tested at the farm and at the milk bottling plant for the presence of antibiotics. If antibiotics are detected the milk cannot be used for human consumption.

What about hormones? All milk has hormones – even organic milk! Think about it, in order for a cow to produce milk they must have the right hormones that occur naturally in their bodies, just like in a nursing human mother.

But that’s not what most people are referring to when they talk about hormones, they usually mean artificial growth hormones (rbST & rbGH). Artificial hormones are used to increase a cow’s milk supply and they are not permitted in organic farming.

Many conventional farmers do not use artificial growth hormones, but some do. It is important to note that the Food and Drug Administration (FDA) does not consider these hormones to be dangerous to humans since they are broken down during digestion and not absorbed in the body.

So what’s the bottom line? It’s your choice whether you want to buy milk that comes from organic or conventional dairy farmers, just make sure you’re doing it for the right reasons. Personally, I buy either conventional or organic milk regularly (it depends what’s on sale) and I drink milk daily.

Author: Leah McGrath, RDN, LDN is the Corporate Dietitian for Ingles Markets based in Asheville, NC.

1960s Slang that Will Remind You of Simpler Times

What’s the difference Between Organic Milk and Conventional Milk?

Vicks for Baby? Is it safe?

Should Parents be Concerned About Miralax?

Choosing the Right Water Flotation Device for Your Child this Summer

Are Mesh Cribs and Hammocks Safer for Infant Sleep?